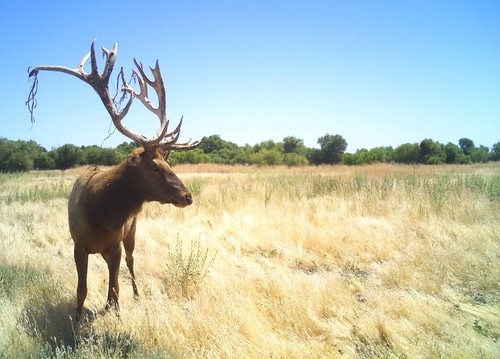 In recent years, the application of non-invasive genetic sampling methods and spatial capture-recapture (SCR) models for obtaining robust estimates of abundance for wild ungulates has increased. Non-invasive genetic samples collected for SCR include any genetic material left in the environment from which DNA can be obtained and genotyped to the individual level. For ungulates, we can collect fecal samples and extract DNA from the epithelial cells on the surface of the pellets, which we then use to assign individual IDs based on a set of DNA markers. These individual IDs can be used as “captures” and “recaptures” in SCR models.  Based on the results from pilot studies resulting from collaborations between the Mammalian Ecology and Conservation Unit at UC Davis and the California Department of Fish and Wildlife (CDFW), CDFW has begun using such methods to estimate abundance of mule and black-tailed deer populations.  More recently, CDFW and the MECU have started to explore their use for estimating abundances of elk populations as well.

Our primary objective in this study is to validate non-invasive genetic SCR methods for estimating elk density, with a secondary objective to compare estimates from SCR to an alternative abundance estimation method known as the random encounter model (REM). At the San Luis National Wildlife Refuge, there are approximately 70 tule elk (Cervus canadensis nannodes) that live in an enclosed area. Their numbers are surveyed seasonally, which affords us an opportunity to test the use of non-invasive genetic SCR methods for estimating density of tule elk. The reasons for such a test are two-fold. These methods have only been applied on wild populations of deer, and application to a population of known density will enable us to assess the influence of sampling effort on the accuracy of our estimates. Additionally, elk generally move in large groups, which violates assumptions of independence between individuals in standard SCR models, but by comparing density estimates to a known density, we can assess the robustness of SCR estimates to this violation of model assumptions.  The alternative method, REM, relies on remotely captured images from trail cameras to obtain parameter estimates for estimation of density based on the ideal gas model and the notion that we can model individual or group movement as the random movement of gas particles through space. This method can estimate group or individual density, and is therefore a promising method for estimating elk density and abundance.