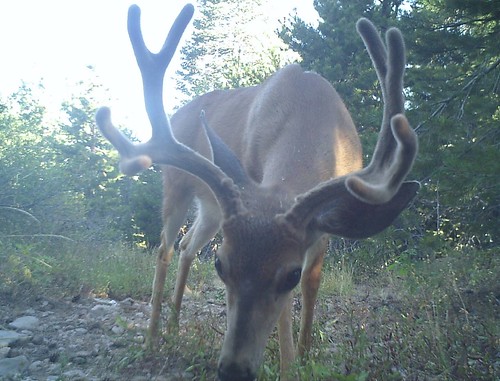 On September 13, 2014, the King Fire in Pollock Pines, CA burned for 21 days over an area larger than 390 km2, with much of the area classified as high-severity soil burn. The burned area included large portions of the annual range for a partially migratory California mule deer (O.h. californicus) herd known as the Pacific Deer Herd (PDH). The timing and location of the King Fire presented a unique opportunity to perform a natural experiment to study the effects of fire on mule deer through continuation of a fecal DNA capture-recapture study that began in the summer of 2013 and ended in the summer of 2014. The initial study was a collaboration between California Department of Fish and Wildlife and the Mammalian Ecology and Conservation Unit at UC Davis and was aimed at establishing an effective study design to estimate population abundance using non-invasively collected fecal DNA samples and spatial capture-recapture estimation of density.

Our study area was located on the summer range of the migratory portion of the PDH, and was west and upslope of the King Fire. We collected samples immediately post-fire in 2014 and one year later, during the summer of 2015, once the deer returned to their summer home ranges after wintering on and migrating through burned areas.  We are interested in whether or not deer displaced from the fire would result in a noticeable increase in density on our study area, and whether changes in migratory behavior induced by lack of regrowth in the high severity burned patches would result in a change in density in 2015 compared to pre-fire estimates.