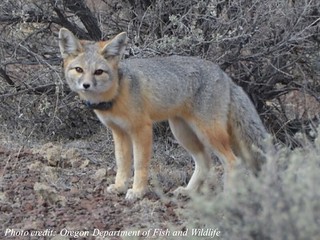 The kit fox reaches its northernmost extent in southeastern Oregon, where it is considered critically imperiled, and listed in the state as a Threatened and Strategy Species. In collaboration with Oregon Department of Fish and Wildlife, we are investigating (1) the feasibility of noninvasive genetic survey method and (2) the genetic status of this population.

Preliminary findings based on mitochondrial sequencing, and genotyping with a sex marker and 18 microsatellites for individual identification indicated high sequencing and genotyping success.  We identified 20 individuals from Oregon sampled an average of 1.7 times each, resulting in an estimate of 20-40 individuals in the population.  Relative to a California population from the Colorado Desert used for comparison, Oregon kit foxes exhibited similar heterozygosity but a deficiency in the number of alleles, which was consistent with a recent population decline.  The genetic effective population size estimated for the Oregon sample was very low (95% CI = 10-22).  Analyses of population structure indicated a relatively narrow geographic contact zone between Oregon and southern populations rather than a continuous north-south genetic cline.  The population has apparently declined in recent decades, has low current genetic effective population size, and is weakly connected (i.e., little gene flow) to kit foxes in Nevada south of I-80.  These characteristics support the current conservation designations.  Consequently, there is a need for continued monitoring of the population, filling in of data gaps, and development of a conservation plan.