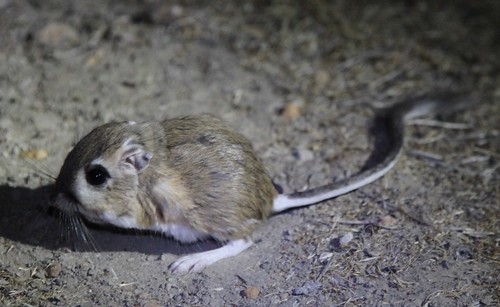 The giant kangaroo rat (GKR; Dipodomys ingens) is an endangered species restricted to the San Joaquin Desert of California that has undergone a 97% reduction in its range over the past century, largely due to loss of habitat to irrigated agriculture. The species is both an ecosystem engineer and a keystones species that 12 other sensitive species rely upon, including the endangered San Joaquin kit fox (Vulpes macrotis mutica), blunt-nosed leopard lizard (Gambelia sila), and San Joaquin woolly thread (Monolopia congdonii). The current range of the species is highly fragmented with the two main populations occurring ~150km apart.

To aid in conservation efforts we are conducting research investigating population substructure with the species, while at the same time examining the evolutionary and ecological relationship between remnant populations. Additionally, we are using genomic tools to investigate whether major populations have developed different adaptations for their local ecological conditions.