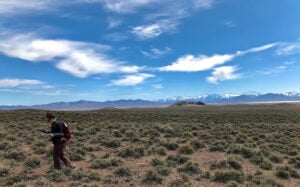 I am interested in using genetic and genomic tools to answer ecological questions relating to how anthropogenic changes are impacting endangered or threatened species. I received my B.S. in ecology and evolution from the University of California, Santa Barbara. Before starting graduate school, I worked with the USFS to measure Southern California stream habitats and endangered steelhead trout populations in a study that aimed to determine the effects of increased fires on steelhead populations. I also had the opportunity to work as a crew lead for a greater sage grouse project in the Great Basin of Nevada. After graduate school, I hope to help with the management of endangered species and ecosystem biodiversity by integrating broad ecological perspectives from community, cultural, and academic resources.